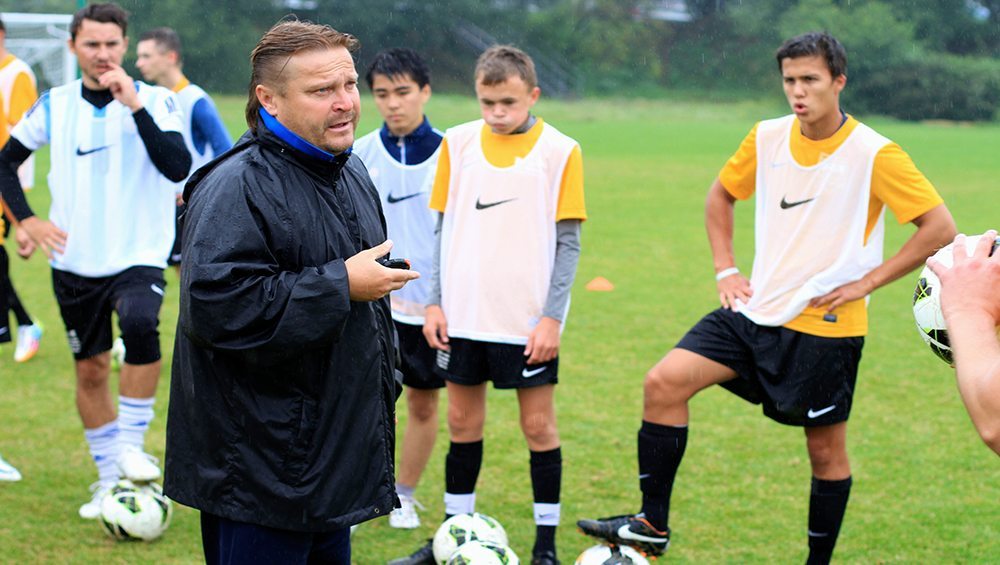 Martin, what is the probability that a young player, who completes a course of the MSM International Football Academy, could start playing in a Czech football team?

The MSM Football Academy pursues several objectives: to give children the opportunity to start a professional football career in Europe, to train under the careful supervision of highly qualified professionals, to discover new talents and perspectives on the football pitch, as well as, in the field of education. From our side, we do everything so that the children may be noticed – we arrange tryouts in the football clubs, but we must take into account the fact that the summer football camp is designed not only for students who have dedicated their lives to football but also for the guys who want to try their hand, to train side by side with professionals, thereby improving their football skills.

Martin, you have mentioned education, and the following question arises: is there a program for children who want to play football and at the same time study at the university?

We have always been striving to achieve a kind of union of these two important areas: sports and education. At the moment, there is a unique program “One-Year Football Academy plus Foundation program” and it’s half-year version. Football Academy graduates are professionals who wish to pursue higher education and at the same time play football.

Martin, is there a chance for the players to try their hand in more successful clubs?

Since FK Aritma is a farm team of FC Dukla Prague, guys are always marked by the head coach, and there is a two-way exchange program of players established between Dukla and Aritma. If a player presented himself from a good side in Aritma, there is a chance to play in Dukla, but it is important that he understands and sensibly rates his level of play. It makes sense to first gain some experience and understand the structure of the Czech and European football from the inside by playing, at least, in the third division, in which the team Aritma U19 plays, as well as in the A team, which plays in the third league. Believe me, these leagues are also very strong and there is serious competition which naturally has a positive effect on the further growth of the players, especially on the guys who have never played before in the Czech Republic.

Are there theoretical classes in your Academy?

Before the official games we have a theoretical analysis of tactics, set aims, and note the strengths and weaknesses of opponents. After the game, we also discuss strengths and the weak parts of the game.

Is it possible for a beginner to start playing good in the first year and to show his strengths?

Yes, of course, it is possible. We provide a sufficient amount of training and playing time to unleash the full potential of the player. Different training methods allow us to identify the weaknesses and strengths of children. But one should seriously consider that entering a team does not automatically guarantee the right to play in the first team. It all depends on their efforts, responsible approach and, most importantly, the desire to become true professionals.

At what age can students come to you?

The optimal age is from 16 to 17 years old. Boys leave school and are ready for entry into higher education. It is a real chance to come to Europe to get a higher education and play football at the same time.

Tell us about the rules of UEFA, please.

According to the rules of UEFA, it is possible to register a player from a non-EU country at the age of 18, which means that only after reaching full age can he be fully involved in official matches. But it’s better to come at the age of 16 – 17, and a year or so, depending on the age, to train with the team, and pass the so-called adjustment period. Still we have a lot of exhibition games, where, naturally, they will be able to play.

If, for example, a player is over 19, does it make sense for him to come?

Definitely there is. First of all, he will be immediately registered in the team, which gives him the right to play in official matches. And secondly, because of his age, he will play either for the main team Aritma, either for the double, which significantly increases his chances to get to the viewings in a major league club, if he plays good.

Do you give more preference to Czech players than to the foreigners?

Of course not. Believe me, I‘ve played at the highest level, and I understand that the most important thing is how the player plays, his attitude to work and to the team. We, of course, with the U19 team set goals to enter the first league, and the main a team to the second league. And of course, as any other club we are interested in the education of professionals who will bring results. These guts in the future can successfully play in the Czech First League or, for example, in Germany or Austria.

What do you think about when a player plays professional football and at the same time studies at the university?

I think it is very good. Sport builds character, motivates a person to have a healthy lifestyle, but it is impossible to rely solely on the sport. In any case, I believe you need to get higher education and have a wide variety of choices of what to do in life. After all, you know, life is unpredictable.

How many exhibition games take place in one summer?

In a 2-month period in summer we play about 12-13 exhibition games, not counting the trainings and mini tournaments. So believe me, they’ll do lots of running!