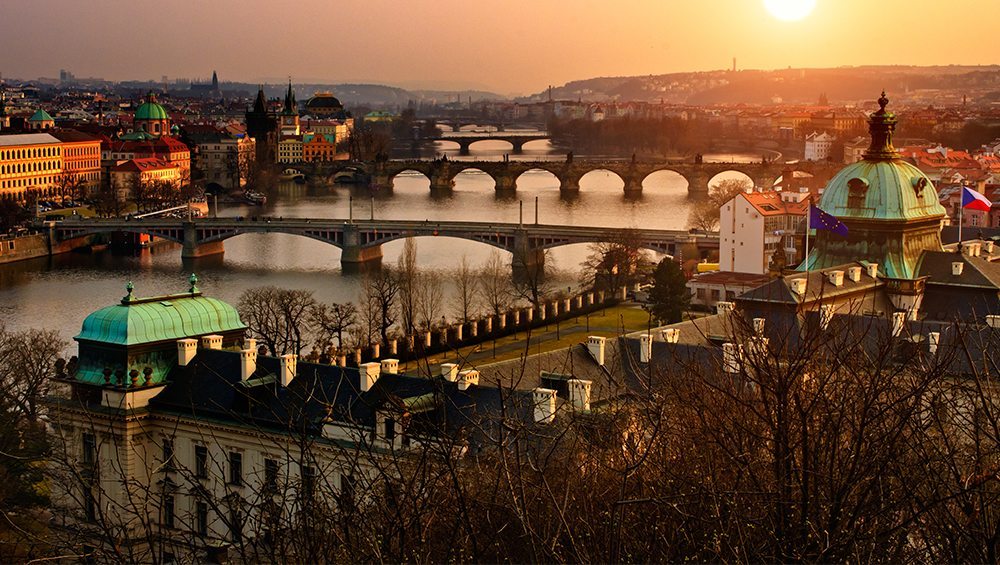 The City of Prague

Prague is an outdoor museum filled with rich artistic heritage, architecture, music, and history. Prague’s medieval network of narrow cobblestone streets will transport you to the fairy tale atmosphere of old Europe. And even if you are attracted only by football in Prague, you will also find many interesting things in the city itself.

Prague was practically prohibited for Western tourists for 50 years. After the Velvet Revolution in 1989, Prague emerged once again as the capital of a sovereign, democratic nation. Today this “City of a Hundred Spires” has regained its full splendor.

Students in Prague have the opportunity not only to get an education in one of the prestigious universities but also to take full advantage of this marvelous city and its many possibilities. Even during a short stay, students will acquire a genuine feeling for this unique European capital, its people, customs, culture, cuisine, and history.

Prague’s downtown area is fairly well-known for its maze-like winding streets, old churches and stunning squares. You can find Czech cuisine in most restaurants, but Prague also offers many types of ethnic cuisine, from Italian and French to Thai and even Mexican! If you want to save some money and still enjoy delicious food, just hop on a subway and visit some of the restaurants outside the city center.

The heart of Prague’s historical center is the Old Town Square. It is one of the best places in Prague where you can start your walk around Prague. Don’t forget to climb to the top of the Old Town Hall tower. The view of the square and the city boggles the imagination!

Prague has one of the best public transport systems in the world. Its system of subway, trams, buses, and boats (yes, boats!) makes it one of the most comfortable cities in Europe. A Prague resident can get anywhere in the city, at any time without using a taxi. There is one very helpful website (www.dpp.cz) which gives you a schedule for all means of transport including the night transport system. It is a handy way to look up how to get to your destination!

More than that all of our summer program students are provided with a transport ticket for all means of transport during their stay.

Prague has a great number of parks and gardens, both in and outside the city center, perfect for walking, playing sports, reading and relaxing with friends. Most parks have cafes and picnic grounds: Franciscan Garden, Petřin Hill, Vrtba Garden, Havlíčkovy Sady, Riegrovy Sady. Also, Prague offers a wide range of opportunities for hiking with excellent trails right within city limits.

The Prague Zoo is one of the best in the world and can be visited along with the Troja Chateau and the Botanical Garden. Despite being named the World’s 7th Best Zoo by Forbes Magazine, most tourists (and locals) never find time to visit this paradise just north of the city center. Unlike most zoos, the animals here are kept in open-air environments that are as natural as possible. Visitors are transported to a world that is far more different from the city just beyond the gates. Don’t miss it!

To find out more about rich art heritage, you can visit one among many museums, theatrеs, or art-galleries. For centuries Prague has been an international theatre center. Prague museums and art-galleries bring to life the history of the city, the times of Charles IV and Jewry, Nazi Occupation, and Communism. These days, every night of the week there is a ballet, symphony, opera, dance, or drama performance to attend in Prague. Students can purchase most theatre tickets at discount rates. For example, students can book last-minute tickets for a ballet or opera performance to the National Theatre for an appealing price of 100Kč.

Also, Prague regularly attracts excellent musicians and artists from all over the world to give their concerts here.

A preserved city center as in Prague is a rarity in modern Europe. Its architectural heritage includes an array of styles such as Romanesque, Gothic, Baroque, Neo-Renaissance, Art Nouveau and Cubist. The city is surrounded by dozens of castles, chateau and historic ruins.

Prague can boast of many buildings by renowned architects, including Adolf Loos and Jean Nouvel. Among contemporary buildings the world-renowned is the Dancing House designed by Canadian architect Frank Gehry in 1992.

Due to its glorious architecture, the Historic Centre of Prague was named by UNESCO World Heritage Sites as the largest urban monument in the world. Come for a visit!

Sports play a significant role in the everyday lives of the Czechs who are passionate about this part of Czech culture. No doubt there are two kinds of sport that superior to the rest in the Czech Republic: soccer and ice hockey. For a country with a population of ten million, the Czech Republic has a relatively successful team which now occupies the 13th place in the FIFA rankings. Both kinds of sport in Prague are represented by two rival teams – Sparta and Slavia.

The football team Sparta, usually along with Slavia, has always been a base for the national team; Sparta players have contributed the most players to the Czech national team. Both teams are constant participants of the Champions League and Europa League. It is on the basis of the Sparta club in Prague that you can take a one-year or half-year program at the MSM Football Academy. If you want to receive more information about our educational programs in Prague – just fill out the form at the bottom of the page and we will contact you with a detailed consultation on all your questions.